BetaKit reports on new funding for our portfolio company, Athennian. 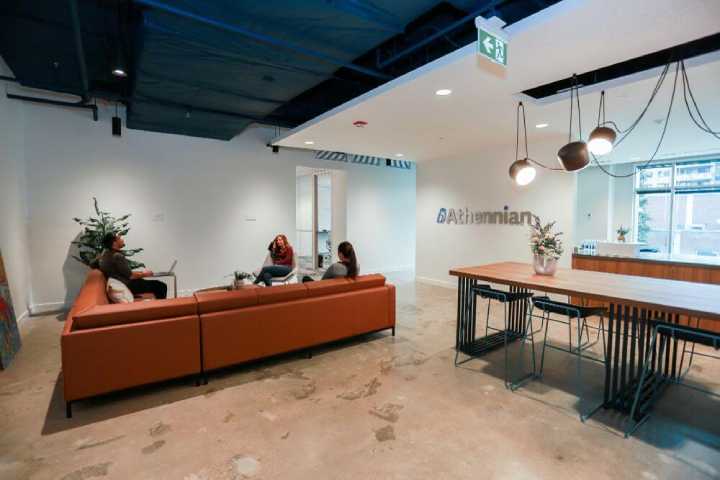 Calgary legaltech startup Athennian is announcing that it has secured just over $41.5 million CAD in financing as it looks to win big in the entity management space.

The company says it has doubled its revenue over the last year, with a 500 percent increase in annual recurring revenue over the past two. This growth has been fueled by the trifecta of digital transformation in the legal sector due to COVID-19; increasing corporate transparency regulation; and a shift from legacy players like Dye & Durham.

Athennian and its investors claim the potential for the startup to be the next legaltech unicorn in Canada – following in the footsteps of Clio.

“Keep an eye, it’s gonna be a Clio number two,” said Sergio Escobar, CEO and managing director of BCF Ventures, which has invested in Athennian since 2019.

United States-based Centana Growth Partner led what Athennian called its Series B round, which saw participation from more than 15 existing investors, including Arthur Ventures, Touchdown Ventures, BCF Ventures, and even Clio’s CEO and co-founder Jack Newton, who joined as an investor in early 2021.

The round also included “a few smaller,” undisclosed strategic investments from angels and Athennian customers.

Of the recent financing, $27 million is primary capital going directly to Athennian, with $5 million in secondary. The round also includes $1.5 million in government grants, and $8 million in what a spokesperson for the startup called a “pending” debt facility.

James Lochrie, partner at Thin Air Labs and Wave co-founder, called this latest round the “war chest” Athennian needs to “crush” its market.

James Lochrie, partner at Thin Air Labs and Wave co-founder, called this latest round the “war chest” Athennian needs to “crush” its market. Lochrie is another long-time investor in Athennian, having joined as an angel in 2018, though he did not participate in the Series B round.

Camara saw a need for cloud-based tech after working as a lawyer in corporate finance and noticing “archaic” practices around managing data and information.

As the pandemic has led to a digital transformation in the legal industry, more companies have entered the cloud-based entity management space.

Athennian, on the other hand, was founded before the legal industry had undertaken much digital transformation, and prior to fellow Canadian legaltech startup Clio becoming a renowned player in the broader legal space.

Escobar recalls how BCF, the corporate venture arm of BCF Business Law Firm, was an early institutional investor in Athennian. Escobar noted both a lack of deal flow for legaltech startups at the time, as well as traditional venture firms not being as interested in Athennian.

All that began to change around 2019. After spending the first couple of years building its tech, Athennian secured its first global customer in PwC in 2018, and over the next two years received $10 million from institutional investors like Round13 Capital, InterGen Capital, and ATB Financial.

Then, as the pandemic hit, things began to accelerate for the entire legal industry. Old-school methods of on-premise computing and storage, or using binders and pen and paper, had to be overhauled in the world of remote work.

With its five-fold increase in revenue since 2020, Athennian names Fortune 1000 companies and the fastest growing law firms among its customer base.

Athennian felt that boom. With its five-fold increase in revenue since 2020, Athennian names Fortune 1000 companies and the fastest growing law firms among its customer base. Some of those names include Dentons and Shopify. Athennian claims to have more than 2,300 monthly active users and around 400,000 entities that are managed using its platform.

Camara’s plan for the Series B capital is to get Athennian to $100 million in annual recurring revenue, and one million entities managed on its platform.

Some of that customer growth has come from companies moving over from legacy players like Dye & Durham. Earlier this year, it was reported that a group of real estate lawyers have been exploring a potential class-action lawsuit against Dye & Durham over price hikes for its products. The company has continued to raise its price in recent years, with a 400 percent hike last year that came along with a promise of a three-year hold.

This proved a boon to Athennian, which Camara claimed got 100s of requests for potential customers after the price hike.

“I kind of call this the final sort of short squeeze into the cloud,” said Camara. “Where you have all these legacy vendors [that] are cranking places and trying to squeeze the last juice out of the orange on these legacy systems, and it’s sort of pushing the people who have been slow to adopt cloud … into the cloud.”

But Camara and his investors feel Athennian is well poised to be the leader in the market.

To fill up its new HQ, Athennian plans on hiring 300 workers over the next two years.

“It speaks a lot to the opportunity that Athennian has unearthed in the market that we’ve got a lot of people coming in following in their footsteps,” argued Lochrie. “I think Athennian is going to be incredibly hard to catch given where they’re going, the strategy that they’re executing their growth at this stage, [and] the amount of money they just put on their balance sheet to be able to accelerate even faster. I think it’s gonna be really, really difficult to keep up with them.”

Part of the strategy Lochrie pointed to includes increasing the attraction of Athennian’s software through integrations. In 2020, Athennian made its first acquisition, purchasing Redox, a Montreal-based tax visualization startup. This was part of a broader play by Athennian to become what Camara has previously called “the Salesforce of legal.”

To that end, Athennian last year revealed plans to launch an open API. It currently has a partnership with​​ iManage Cloud to streamline documentation management, and Camara pointed to other companies that Athennian is working to integrate with as well.

While Camara also spoke about the potential to launch an app store-style marketplace last year, the CEO said Athennian has turned its attention for now to its API integrations.

Athennian also plans to use its Series B capital to expand its product suite. Lochrie, who sits on the company’s board of directors, pointed to the potential for Athennian to address minute books and other inefficiencies in the legal departments.

The funding comes along with a newly opened global headquarters in downtown Calgary. The startup hosted a housewarming party for the new space in mid-March, which is located in the Beltline neighbourhood.

To fill up its new HQ, Athennian plans on hiring 300 workers over the next two years.

Athennian is part of a growing group of tech companies that are helping to fill long-empty downtown Calgary office space. The city has seen Amazon Web Services grow its presence alongside Indian firms Mphasis and Infosys. Homegrown Benevity has occupied a large space in the city for a number of years, with nearly half of its 800-plus workforce based there; and Neo Financial announced this year plans to expand its footprint in downtown Calgary to house its growing 400-person team. The long-awaited Platform Innovation Centre is also set to officially open this year to house accelerators, venture funds, and other ecosystem services providers.

With files from Charlize Alcaraz.